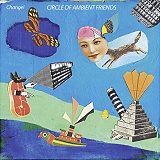 Change! began in 1999, when frontman Aaron John began writing a new form of experimental pop music on the wood hammered dulcimer. Involved in many projects, AJ used this name to umbrella many of the incarnations of his song writing and quickly shifting band lineups. Somehow, the title stuck and over the past six years Change! has enjoyed live collaborations with nearly 30 artists while making it's home in Brooklyn, Austin and now Oakland!

The fundamental songwriting continues to be founded on the wood hammered dulcimer (built by Aaron's uncle), though special projects have also been written around the piano, theremin, and synthesizers. In the end, it is Aaron's witty lyricism and distinct voice which has brought all the the forementioned sounds together.

Circle Of Ambient Friends is a very heartfelt and private project which was primarliy penned during the summer and fall of 2003. These songs focus much less on the dulcimer and instead rely on plunderphonics, collage style song writing and darker lyrical themes (reminiscent of Aaron's high school roots of listening to the Pink Dots, New Order and Dead Can Dance.

It was with the assistance of Tim Blaze, that these songs were completed in the intended form (during the summer of 2005.) These recordings are a nice insight into many of the solo sets which dominated Change! performances during 2003-2004. Many thanks to Comfort Stand for encouraging us to finish and release these songs. And we promise, there will be many more to come!